Modersohn-Becker’s track of the whenever she’s ready! (part 2)

Modersohn-Becker‘s been up to no good again and this is the result.

And here it is.

Modersohn-Becker’s track of the whenever she’s ready! (part 1) 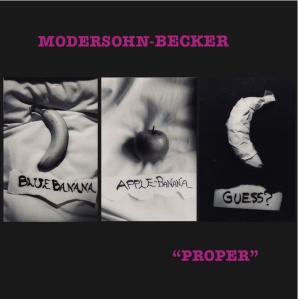 I have resuscitated Modersohn-Becker and would like to regularly begin posting new DIY tracks. Originally I wanted to make this a weekly occurrence, as an exercise, so that I would have to keep creating tracks rapidly and simply without dwelling too much on my insecurities or seeking perfection. Unfortunately, knowing myself, being tied down to a weekly schedule might make this endeavour become more a source of stress than liberation or pleasure… so I would rather call this a “regular” occurrence than a weekly one. This way there won’t be any “musts” or “shoulds”. I will do my best to post regular, “imperfect” tracks, though.

Here’s a track I made for an upcoming free compilation of music by artists employing ‘the art of Wabi-sabi, that is, “the art in imperfection”‘ and who find ‘the beauty in broken things’ (how very M-B!).
It’s called “Properly Wrong”.

A couple of months ago my Sound Art master class took part in a sort of “exchange” workshop with Poetic Practice master students. For the day of the workshop, we were each asked to bring in a “page-based piece of writing” narrating a journey between two points, which we might then use as a starting point for our work on the day. Here’s what I produced (click on picture for larger version): 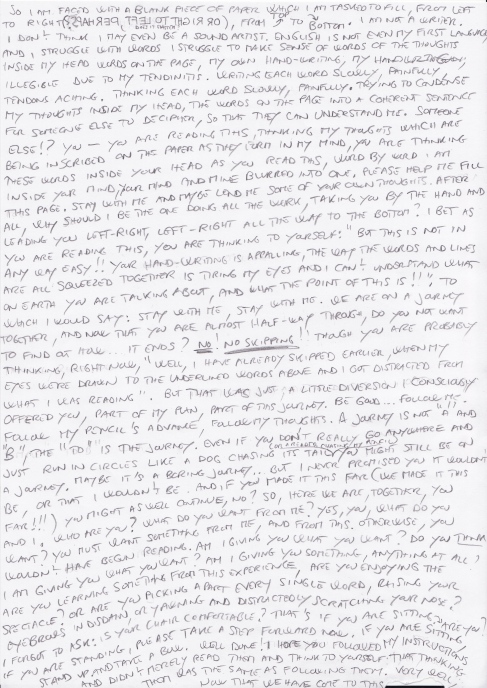 I’m becoming rather interested in using text and handwriting in my current work, as you’ll see in my upcoming posts, as I work through my back-log of updates. This was not a planned direction that I took but rather I have suddenly found myself working in this way with several pieces, as different projects that started out as non-text-based seem to have naturally progressed in that direction. 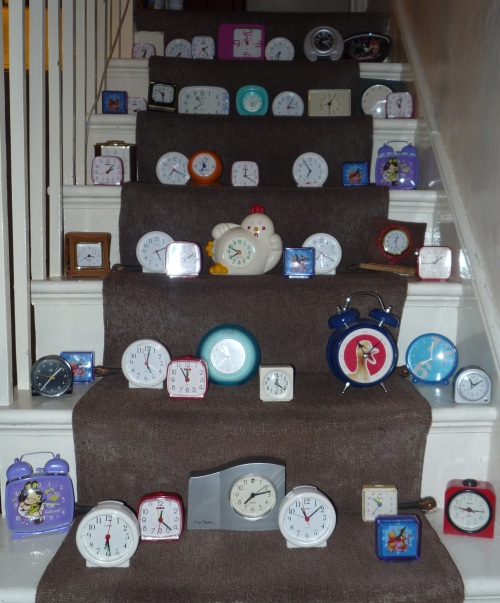 Here are some very rough recordings. I used around 40 clocks, placed in irregular rows to form a horseshoe-shaped semicircle (the shape I think I would like to set them in for the final piece). I placed an Edirol in the middle and started recording.

Playing with the alarms:

These are just very rough tests. I merely switched all the clocks on and manually activated/stopped some of them, so my handling of the clocks can be heard in the recording, as well as ambient noise. I was very curious to hear what the alarms would sound like out of context, but in stereo sadly it’s hard to convey their sound. Maybe I will try making some binaural recordings, once I have more clocks and can then begin structuring the alarms into more of a composition.

As you can hear, most alarm clocks, though of different makes and age, seem to possess the same type of alarm, which causes some interesting interactions as these alarms go on and off. A strange auditory hallucination also seems to take place: no matter how many of these alarms are added to the mix, the volume never seems to increase much. The mechanical bells & beater alarms are the loudest. It would be interesting if I could get my hands on more of these clocks as well as finding clocks that have a different bell sound (seemingly a near-impossible feat!).

in the next post, I will talk about the visual/physical layout of the work, as a plan has been slowly coming together in my mind (and on scraps of paper that seem to be sprouting up everywhere), but I have not talked of it on here so far.

Behold! They have outgrown their A4 box.

42 clocks and counting, but still not enough. Must do better. 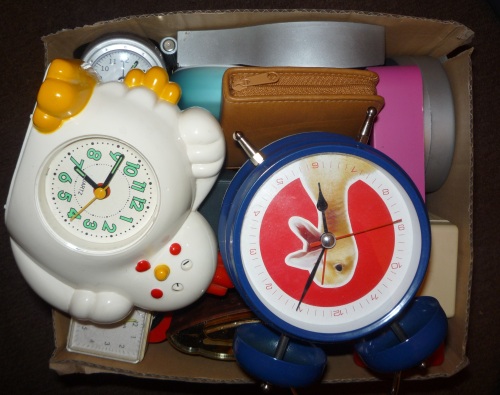 I would like at least a hundred to experiment with in the next month, so I have started purchasing brand-new job lot alarm clocks, because they are (relatively) cheap and readily available, even though I would prefer second hand, pre-owned clocks.

Sadly, some of the used clocks I have bought were broken, so I have had to open them up and improvise myself into a clock-doctor. I have so far fixed a couple, and am very proud of the results, since the two clocks I have repaired are rather special. One is the chicken-shaped clock visible in the picture above, which crows instead of ringing, and the other has a battery-operated alarm that can either emit a (rather horrid) melody or features a mechanical-clock-style bell that has two loudness settings (very loud is my favourite)!

I also bought an extremely disappointing cuckoo clock because it looked too tempting to resist. It didn’t turn out to be as exciting as advertised, of course. Not that, had it been, I would have definitely used it in my piece, since it is not an alarm clock! I have to admit that I think I am developing a little clock obsession. Next I would love to create a piece using grandfather clocks, as I think they are wonderful (but unfortunately exorbitantly expensive and bulky)!

I have made some experiments using about 25 clocks which I think is the minimum amount of alarms I would like to have ringing at any one time [though I may also put in quiet moments when only the ticking or a handful of alarms can be heard, and I still have to decide whether these will be intentional or whether they will be a consequence of batteries running out]. In order to have 20-25 clock alarms going off in a period of 12 hours (or 24 for digital… but right now I am sticking with non-digital), I would have to have 240-300 working alarm clocks… so 6 times what I have now!

I have made some recordings of the results of my experimentations, which I will post shortly.

Yes, I haver started a new project. It’s called “Awaiting A Title”, and it can be found HERE.

Awaiting A Title is a process set in motion by a carefully chosen sound file, which the general public is invited to describe “in their own words”. Their descriptions, sent in as text, are numbered and added to a database collected on the work’s website. These are the text scores that musicians, improvisers, performers, as well as any member of the public willing to take part in the project are then invited to use as either score for improvisation or brief for composition. These interpreters are subsequently asked to send in the results, which are compiled into a further database and displayed on the same website.

Artwork for Mail Me Art 2

I sent in some mail art to Mail Me Art 2, and it has now been added to their gallery, which can be found here.
This is my first rudimentary attempt at mail art, and I thoroughly enjoyed it.
Hopefully there will be more… 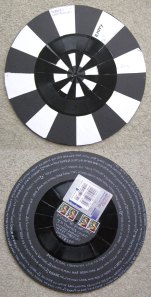