Reflections on Arman, time, junk, art… and my clocks piece

I still can’t quite believe I had never heard of Arman before yesterday, but hopefully this is only because I still have much to learn when it comes to art, especially art whose primary focus is not on sound, rather than because he is not that widely known.

Last night I spent a great amount of time looking at the Arman works displayed on his official website, and found them utterly charming. I think that the fact that on the website they are all… massed together in one place, accumulated, intensifies their power.
In fact, I would love to see a whole gallery just full of Arman pieces, an entire retrospective dedicated to the artist (I know there have been, but what I mean is that I would love to personally experience one!), just so that all these works could be seen together and their impact thus be multiplied… an accumulation of accumulations.

Something definitely happens when the simple objects that Arman accumulates are put together and displayed in this way. As I have confessed above, my knowledge of art is still somewhat limited, so forgive me, as I am probably about to say something that has been said endlessly before and better, but this repetition, this amassment forces one to reconsider the object thus displayed, it takes the object beyond its physical existence as an object and makes it become the idea of the object itself.
I will explain what I mean: by looking at the work in the picture immediately below, for example, I am not merely looking at a bunch of clocks: 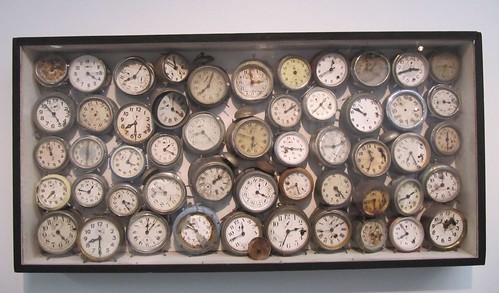 The repeating of the clocks in the work kind of makes the individual clocks disappear, and the idea of “clock” emerge, for me. That is, by examining this work, one finds oneself perceiving “clockness” rather than merely looking at a bunch of clocks.

While looking at the piece above, once separated from the clock-object I then also find myself thinking of things that relate to the idea of clock, like time (a clock being the time-telling device par excellence) and its passage.
There is also maybe a sense of alienation stemming from the repetition (one is “desensitised” to each clock?), but this immediately disappears when the piece is more closely inspected, and each clock is found to be different, to be an individual telling its individual story –so the piece becomes personal.
This, I suppose (sadly I could not find larger photos of this particular piece) would happen even with a work like this one, in which the clocks are all of a similar make and arranged in a more “neutral” way, to “depersonalise” them further:

With Arman’s clock accumulations, because of the clock’s nature as a time-telling device, I find myself also thinking of theses clocks’ past, present and future; of the memories attached to each, the signs of which are visible in the way each clock is slightly (or severely) worn; of the people who may have owned them; of the present piece and my looking at it, in my present (and of the fact that I am in fact looking at a digital picture of the work, which is an un-degradable and endlessly reproducible freeze-frame of time); of the piece’s future: what will happen to it as time goes on, and what of the artist’s memory… how fast will he be forgotten? Will this piece itself one day become junk, as the materials that made it up were once junk themselves, which was then elevated into art?

Time under glass. An attempt to preserve it. I am reminded of Damien Hirst’s “The Physical Impossibility of Death in the Mind of Someone Living“.
At the same time… These plexiglass boxes look a bit like forgotten exhibits in some dusty museum.

I’m not sure if this was the artist’s intention… but all of the above is what I get from studying photos of his clock accumulation pieces.

As mentioned briefly above, the blue clocks piece (actually called “Minutes”) that I posted above seems much more clinical, less personal than the other alarm clocks accumulation work also pictured above. However, I would say that in all probability that is only because all I have to go by, so far, is a tiny digital photograph in which the homogeneity of the clocks is accentuated by distance and lack of detail (I will keep looking for a better quality picture, and see if I can find some books on the artist to leaf through, too). I thus have only a vague idea of how the actual physical piece might look like, close up, but I am sure that once again, if examined closer, little differences would be present between each apparently identical clock.
Another interesting thing about this piece, as I can observe it from its photograph, is how much it looks like a Warhol silkscreen, from a distance.

On the subject of similarities to other artists’ works, I was also very interested to see Arman’s artworks involving musical instruments, some of which reminded me of Christian Marclay’s impossible instrument sculptures (and some of which made me think a little of cubist painting! Particularly the coleres pieces involving dismembered instruments laid flat). Sadly I could not dwell on this similarity for too long as I feel that its discussion would be somewhat off topic, for my present research, but I will probably revisit this work at some point in the future…

On my way to work, today, pondering over the Arman works, I caught myself thinking about what makes a simple object into a piece of art – about readymades, or even about what makes an idea become a conceptual work of art.
To my surprise, I suddenly remembered a TV advert from a couple of years ago (sadly I cannot recall the brand, though after spending far too much time fruitlessly searching for information or videos of it online, I believe it may have been AirWick), which featured a gallerist accidentally knocking a piece of modern art off its plinth and breaking it, and replacing it with a plastic air freshener to cover her tracks. Subsequently, an unknowing visitor to the gallery intently studies the “piece” thus created and proclaims it to smell wonderful.
The joke, in the ad, is that the freshener packaging looks so stylish, it’s “mistaken” for art.
However, the freshener, intentionally put on the plinth to stand in for an artwork, arguably does in fact become art, by virtue of its presentation. As with readymades and conceptual artworks, I believe that objects (and ideas) become art by virtue of their presentation as such (although I would like to point out that presenting anything as art does not necessarily make it good art).

Presentation thus is very important: the plinth; the plexiglass box; the choice to repeat the object or present it on its own…. or just the choice to talk about it in a certain way, and thus raise it on a plinth made of words. All these things are part of presentation. Presentation says: “consider this”, “consider my intention in choosing to show you this”.

Thoughts on my own work in relation to all the points discussed so far in this post and to Arman’s work:

This entry was posted in Clocks, Research, Thoughts. Bookmark the permalink.